ESPN commentator says that if the World Cup were to be held today, Evans would be the starter.

Yes, those were Alexi Lalas' actual words during the pregame of the United States-Bosnia and Herzegovina friendly on Wednesday. The ESPN commentator really thinks Brad Evans could very well end up being the starting right back in the 2014 World Cup.

Obviously, there's still a lot of time between now and next June -- about 10 months, in fact -- but right now it's hard to argue with Lalas' logic. Following another solid performance against BiH, the United States has now won five straight games in which Evans has started at right back. What's even more impressive is who those games were against. 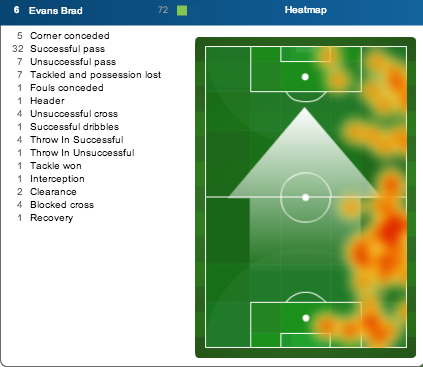 A solid if unspectacular performance from Evans.

The first win, which also happened to be his first start at right back under Jurgen Klinsmann, was that 4-3 win over Germany. Sure, it wasn't a first-choice German squad, but that's still the No. 2 ranked team in the world. There really aren't circumstances where that can't be considered a good win. Evans wasn't necessarily great in that one, but he held his own and showed some promise.

The next three were World Cup qualifiers, albeit two of them at home. But the one away qualifier was also the game that Evans scored the last-second winner. Evans was pretty solid in all three and helped anchor a backline that only allowed one goal during that stretch.

The game at Sarajevo was supposed to be Evans' first, and perhaps only chance to show what he could do in a hostile environment against European opponent: the kind of test he'd surely face at the World Cup. As Zach said on Sounder at Heart in his earlier writeup, Evans had some shaky moments in the first half but settled in nicely and had a solid second half while also moving up the midfield for about 10 minutes.

If this was really Evans' job to lose before the BiH match, there's no reason that should have changed afterward. It's a remarkable and almost crazy development, especially considering that Evans has not played a single minute at right back this season for the Seattle Sounders. To say there's some skepticism about his ability to hold onto this position among United States fans is probably being kind.

But if Klinsmann has shown one thing during his tenure, it's that public opinion is of little concern. And right now, Evans appears to be his guy.

The challengers to Evans' spot are probably down to Steve Cherundolo, Timmy Chandler and Michael Parkhurst. At this point a year ago, Cherundolo and Chandler were the clear favorites to be starting in Brazil, but a combination of injury and unavailability have clearly knocked them down a peg or two in Klinsmann's eyes.

Cherundolo has been the starter at right back during each of the last two World Cups and is easily the most accomplished of the bunch, winning 87 caps and making nearly 400 starts for the Bundesliga's Hannover 96. But he's also 34 and appears to be on the outs with Klinsmann, as he was passed over for the first three Hexagonal matches and hasn't been called up since October 2012. A knee injury has also contributed to his extended absence, and time seems to be running out on his ability to get back into the team.

It's a similar story for Chandler, whose aversion to flying was apparently the biggest hangup in his reluctance to commit to the United States in the first place. Chandler's last cap came in the infamous 2-1 loss at Honduras on Feb. 6 that seems to have been one of the catalysts for the United States' current run of form. The 23-year-old may offer the biggest upside of all four players and has been battling injuries, but Klinsmann recently went on record saying that others had simply passed him on the depth chart.

The final real challenger would seem to be Parkhurst, who actually has more starts at right back than any other player this year. Most of those starts came in the Gold Cup, though, and Klinsmann has made it clear that qualifiers weigh heavier on his decision-making process. What could also hurt Parkhurst is that he's going to be fighting for minutes at FC Augsburg, a team that may well be fighting relegation in the Bundesliga.

Evans, meanwhile, can reasonably expect to start the next two qualifiers and will almost certainly be getting heavy minutes with the Sounders, even if it's not at right back. Oh, and by the way, he's currently enjoying probably his best MLS season. If Evans can put in solid performances on the road against Costa Rica (Sept. 6) and at home against Mexico (Sept. 10), he will have put himself in a very strong position.

• Johannsson gets go-ahead to play for U.S.