From inside the beast: Seattle puts on a red, white and blue show in USA win

If you're still harboring doubts about whether or not Seattle is a good place to hold major USMNT matches, you're either not paying attention or refusing to accept what's right in front of your face.

Share All sharing options for: From inside the beast: Seattle puts on a red, white and blue show in USA win

I'm sitting on an airplane as I head home from Seattle after experiencing yesterday's United States victory over Panama. My reasons for the trip were never about the USMNT -- it just happened to work out that way -- but I'm glad it did because I feel like I experienced something special.

USA shines in 2-0 win over Panama 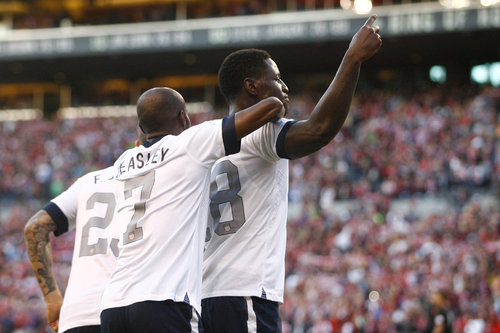 For weeks since the official announcement that Seattle was awarded a World Cup qualifier, there's been a great deal of consternation, discussion -- pick your word -- as soccer fans in the Emerald City attempted to justify the USSF's decision, despite the fact that a real grass field would be laid over CenturyLink Field's artificial turf surface. It never really should have been the story, but it inevitably was, at least until the game finally kicked off last night.

I was on the south end of the stadium, in the stands with 40,847 of my closet friends, to experience what was my first meaningful international soccer match. The atmosphere was excellent leading up the match and there was a definite energy in the stadium that you could feel. Sure it's cliche to say, but everyone in that stadium knew the importance of the game and you got the feeling they wanted to put on a show for the rest of the country.

Seattle's lobbying efforts to get a US game that mattered has been a regular talking point among the soccer community here in the United States, so there was a bit of a spotlight on ticket sales and whether or not the dedicated Seattle Sounders fan base would translate their passion for rave green into passion for the red, white and blue.

If you were watching on television you should know the answer to that question. If you were in the stadium, you definitely know the answer. For everyone else, allow me to tell you that Seattle soccer fans more than lived up to the hype.

It felt like the stadium was shaking and for all I know, it probably was

CenturyLink was loud from the opening kick, but after Jozy Altidore put the US ahead in the 36th minute, it was like a mythical leviathan rising and unleashing a passionate roar into the air.

It felt like the stadium was shaking, and for all I know, it probably was.

It was a cheer that encapsulated the joy of seeing the national team go into the lead, but also a release of tension as everyone there supporting the US -- which was easily 99 percent of the crowd -- did not want anything less than three points.

If Jozy's goal was a release, Eddie Johnson's 53rd minute strike was a party. The reaction was even louder considering it was a Sounders player that netted the goal, drawing a bit of extra oomph from the seventh-largest crowd to ever see a USMNT home World Cup qualifier.

Standing in the middle of it all was something special. I tried to just soak in the noise coming from the crowd, the chanting and singing coming from the American Outlaws a section below me. I wanted to remember the experience because it was like nothing I've seen before at a live soccer match.

The tifo created and executed by AO Seattle was easily the best I can remember seeing at a USMNT match. I didn't get to see it until later in the night as I was helping create it -- I was in the white stripe near the top -- and I'm sure it looked amazing to everyone around the stadium and the players on the field.

Easily the best moment of the night was the "boom boom clap" moment when a single double beat on a large bass drum in the supporter's section began one of the most soul stirring moments I've ever seen at a sporting event. The fact that nearly everyone in CenturyLink knew what to do when it started -- or quickly figured it out -- made it even more special. It was beautiful, haunting and gave me a chill.

You can pick on Seattle soccer fans all you want. You can made the asinine claim that they didn't sell enough tickets -- which by the way, please shut up, because there's no other city that would bring 40k+ on a Tuesday night against Panama -- or you can whine about there being a few too many Sounders-related chants directed towards Eddie Johnson or Brad Evans. You can do all of these things to make yourself feel better about the fact that the only time your city can get a crowd that big for a US game is if 80 percent of the crowd is wearing the jersey of the team they're playing.

The most fun USA team ever 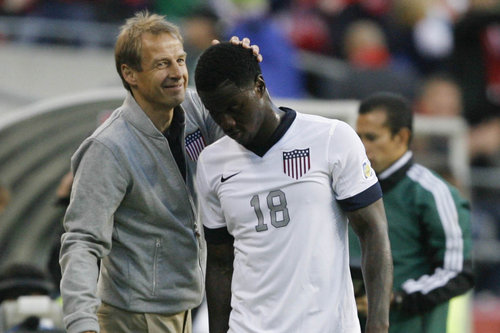 The historically stodgy U.S. has turned fun under Jurgen Klinsmann

While the numbers might be an estimate, the points are very much factual.

You want what Seattle has going right now. If you have an MLS team in your city, you likely dream about having the combination of committed ownership and passionate, dedicated and generally intelligent fans that Seattle has.

Sure, I'm currently a bit smitten by the city and the soccer community there. Yes, there are other fantastic places to host U.S. games that provide great crowds and atmospheres ... but they aren't Seattle. There's something special going on there and they shined on Tuesday night.

If U.S. Soccer is content with the field situation and the Sounders ownership group is willing to go through the hassle of putting down the temporary grass field, there's no reason Seattle shouldn't be a regular stop during qualifying cycles. In fact, I truly hope that the USSF does a litmus test friendly against Mexico there before qualifying for the 2018 World Cup begins.

If the crowd ends up as pro-US as it was last night and is able to bring at least the same intensity, you might have yourself a new option for those all-important home games against Mexico.

Just something to think about for the future because based on what I've seen in the aftermath of the match, U.S. officials, coaches and players were all beyond impressed by the crowd and the energy in the stadium.

Well done, Seattle. But of course, you'll have to do even better next time ... and I know you can.