American Outlaws to fill both endlines in Kansas City, some still left out

The USSF is going to leave some of their most ardent supporters left out in Kansas City, but they can still fix their mistake.

Share All sharing options for: American Outlaws to fill both endlines in Kansas City, some still left out

The American Outlaws will be out in full force when the United States hosts Jamaica on October 11 at Sporting Park in Kansas City, KS. Both endlines at the beautiful stadium will be supporters sections for the match that could see the U.S. clinch a spot in the 2014 World Cup, setting the stage for what could be an epic celebration.

At least for some people. Not everyone who wants to join the Outlaws will be there. The two endlines is not enough to accommodate all of the people who paid for tickets through the presale, leaving some without tickets for the match. It is possible that the USSF will expand the section further, allowing for the remainder of fans to get tickets, but for now, some fans are left with this email. 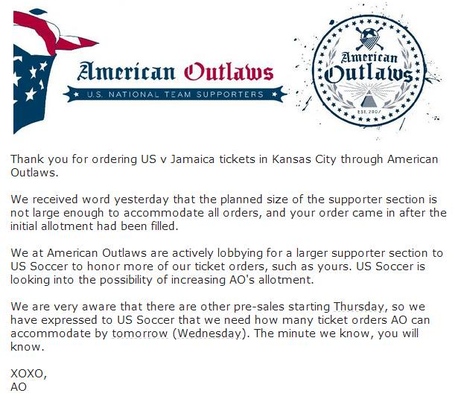 The atmosphere in Kansas City will be tremendous regardless of whether the USSF makes room for the additional supporters -- just as it has been in the Americans' previous two trips to KC, when the supporters only made up one endline -- but missing out on tickets is a tough pill to swallow for those who booked flights and made plans to be there that weekend. Worse, those people have been dealt this blow by the USSF, which is supposed to be in the interest of growing the game and uses those same people to advertise the team at every turn.

There are reasons the USSF may have limited the American Outlaws section. They are still in the business of making money so they can fund the entire program, all the way down to the youth teams, but couldn't they have made it an option for those American Outlaws left out to buy tickets at face value? Maybe some wouldn't have been able to afford the more expensive ticket, but at least they would have had the option.

If there is a good reason that this happened, it would be nice to hear it. But it's tough to imagine a reason precluding fans from having the chance to get in if they are the priority they should be.

For years, the USSF has begged fans to come out. They have lamented having empty stadiums. They have wanted to have stadiums full of Americans. They wanted the diehard fans who would travel across the country to see their national team play.

Now they have it and they should be the USSF's first priority. But they aren't and it's a shame.

Luckily, it's correctable. They can still put those fans they so long desired -- and who are first in line for every ticket, jersey and whatever else U.S. Soccer hawks -- first.

• Right back is Evans’ spot to lose

• Johannsson gets go-ahead to play for U.S.