The medical team delivered Jozy Altidore and the U.S. some good news.

Share All sharing options for: Jozy Altidore cleared workouts ahead of WCQ's vs. Costa Rica, Mexico

The United States should have their top striker and hottest player available to them when they take on Costa Rica and Mexico after Jozy Altidore was cleared to resume workouts ahead the upcoming World Cup qualifiers. Altidore missed Sunderland's match on Saturday with a sore hamstring and there was concern that he wouldn't be fit to play for the Americans, but he was evaluated by doctors upon arriving at U.S. training camp and after a MRI, they gave him the go-ahead to train. 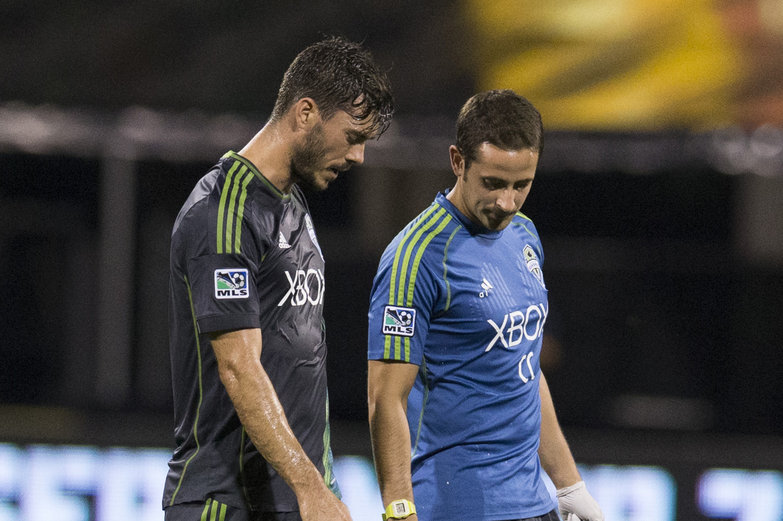 A calf injury has ruled Brad Evans out vs. Costa Rica and Mexico

Jurgen Klinsmann wouldn't go as far as saying that Altidore will definitely play on Friday versus Costa Rica, but he is optimistic that the red-hot striker would be out there. Altidore has scored in a record five straight matches for the U.S., including a hat trick against Bosnia and Herzegovina last month.

Even if Altidore plays on Friday, he may not be on the pitch when the U.S. plays Mexico on Tuesday. The striker is one of 10 Americans carrying a yellow card and if he is cautioned in Costa Rica, he would be suspended for the U.S.' clash with the Mexicans. Whether Klinsmann takes that into consideration when determining whether to play or start Altidore remains to be seen, but it wouldn't be crazy for that to play a part in his decision making if the striker isn't quite 100%.

If Altidore doesn't play, or if he comes off the bench, Klinsmann will have to start either Eddie Johnson or Aron Johannsson up top. Johnson seems the safer bet, with his goal scoring record against CONCACAF clubs and his experience in international competition. But Johannsson does have four goals in four matches for AZ Alkmaar this season and the U.S. may trust his ability to handle the pressure even though he has only played one international and no World Cup qualifiers. That the match in Costa Rica is at Estadio Nacional and not Saprissa would certainly makes things easier on him, if he is called upon.

The U.S. has a chance to clinch a spot in the 2014 World Cup on Friday, although they would need some help from other teams in addition to beating the Ticos. If they can't get it done then, they will still have three more matches to do it, including against Mexico next week -- and you can bet that they would love to celebrate their clinching in front of Mexico -- but the earlier they do it the better, and having Altidore makes punching the ticket that much easier.

• Evans out for upcoming WCQ’s

• AO to pack KC, but some left out