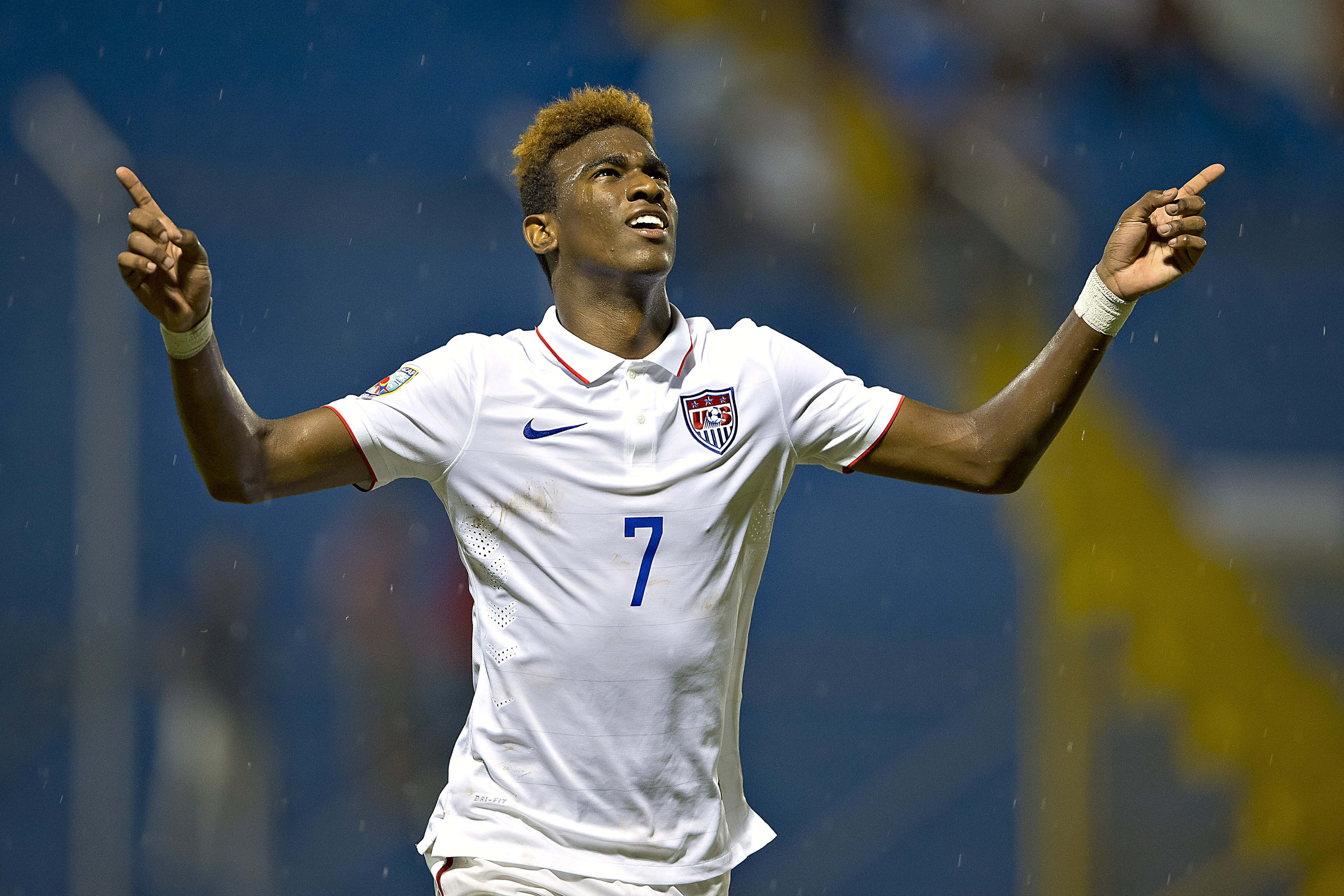 If you follow any of U.S. Soccer Twitter’s cast of generally spot-on youth aficionados, you’ll know that the American U-17 team is possibly-to-probably the best soccer team in the entire men’s stable. The U-17s have made deep runs in foreign tournaments a habit in the last two years, and feature several players in some big academy set-ups both domestic and abroad. The crown jewel is undoubtedly Christian Pulisic, the Pennsylvania attacking midfielder who has spent the better portion of last season with his new club Borussia Dortmund and starred for their U-17 team down the stretch, starting in both legs of the semi-finals and the final of the Germany’s Bundesliga B-Junioren Championship (which Dortmund won, as it happens). Pulisic is quick and crafty, capable of hitting the perfect pass, scoring clutch goals, and becoming a minor Vine sensation. This post is not about him.

This post is about the player who is arguably the U-17s second most important attacking player, Haji Wright. Wright and Pulisic both posted silly final goal tallies with the USMNT youth squad over the past year (Wright finishing with 18 goals and seven assists from 22 games in 2014). Wright is physically imposing even for players several years his senior, and has shown ability that suggests he can play at a high level even when he’s not the person on the field who hopped out of the gene pool at the best possible point.

"Suggests" is the key word there, because Haji’s big numbers hide an inescapable fact for the U.S.: Wright was just not that good in World Cup qualifying. In fact, the entire U.S. team was not that good in World Cup qualifying; playing against clearly inferior teams technically, the Young Yanks often found themselves being run off the field, drawing with a Honduras side benefiting from home-field advantage and losing to Jamaica 1-0, before finally beating the same Jamaicans in penalties to qualify for October’s World Cup by the skins of their teeth. And a lot of that had to do with Haji Wright.

To make a long story short, Pulisic missed out on a couple matches in qualifying due to injury. In his absence and even tentative return, the U.S. squandered two separate opportunities to win the group and automatically advance to the World Cup. Instead, they had to play a final winner-take-all game against a surprisingly resilient and well-coached Jamaican side. And while many players the U.S. had in offense failed to step up into the void Pulisic left, the space that sets the U.S. side apart from lower-level teams and enables them to dominate games more often than not (players like Alejandro Zendejas, Josh Perez, Joe Gallardo, and Luca de la Torre, all who had a perfectly good tournament but not a consistently great one in the end), Wright’s absence was the most conspicuous. This was the kid with almost a goal per game conversion rate over the last year, fluffing chances from his spot on the left side of Richie Williams’s 4-3-3. He finished with just 1 goal from 6 games at qualifying, in a group devoid of Mexico, Canada, Costa Rica, and Panama.

Pulisic and Wright were held up as twin stars, equal in power and gravitational pull. That façade began to chip at World Cup qualifying. But CONCACAF qualifying was just one tournament, and one poor tournament surely did not damn a player. Besides, both still had the prospect of strong clubs interested in their signatures on fancy European contracts. Both spent a good chunk of the past couple years in Germany, Pulisic leaving PA Classics and Residency in Bradenton, FL to train with Dortmund frequently, and Wright doing much the same, leaving the friendly confines of LA Galaxy’s academy to train with Schalke. It came as a bit of a shock, then, that after the World Cup qualifying campaign, Wright announced he had signed a professional contract—with the New York Cosmos in the NASL.

This move was met with…cautious optimism? Honestly, I’m not sure what to call it. People were a bit let down at not having another American training in a perennial Bundesliga heavyweight’s academy, but possibly this was a good thing. Maybe the lower level of competition and league would allow Haji invaluable playing time, good experience learning under a legend such as Raul, and respite from the never-ending American soccer hype machine.

One of those things Haji is definitely achieving: his fairly-regular highlight reel has gone very quiet, and mentions of him on Twitter are near-silent compared to 2014. As for learning, anyone’s guess is as good as anyone else’s. Playing time? Wright has appeared in official matches for the Cosmos just twice, while also appearing and scoring in matches for the Cosmos Reserves.

Wright is a bit of an enigma. He clearly has big physical gifts, but now the question of whether or not those gifts are being given the proper room to grow and be cultivated is a serious question mark for the USA’s (literally) biggest scoring threat. Playing time is generally agreed upon as being central to development in the soccer world. Pulisic is seeing plenty of it against other top German youth setups. Wright, on the other hand, is seeing next to none of it in the U.S.’s nominal second-division, but has the bonus of playing first team games and even the chance of scoring first team goals. Even so, I’m sitting and looking at updates of the Cosmos Fourth-Round U.S. Open Cup match with NYCFC, and Wright has failed to make the 18 completely for the Cosmos.

So, I suppose the question I’m asking here is the obvious one: Were the Cosmos the right move for Haji? Even staying at LA would have given him a clear path to MLS, but he’s struck out on his own path, a very different one from many of the players who spend long periods of time in youth residency. One thing is for certain: the U-17 World Cup is coming in October, and if the U.S. want to do well, Wright needs to be firing in goals like he was in 2014.

Feel free to sound off in the comments below. Embrace the chaos and confusion of the dark internet void.