Can Mallory Pugh go the distance with the WNT?

Will Pugh be the next Mia Hamm, or will she flare bright and then fade out?

Share All sharing options for: Can Mallory Pugh go the distance with the WNT?

In the history of the USWNT, there have been 19 players capped before their 18th birthday - including Mallory Pugh and possibly Ashley Sanchez. There's no way around the fact that being capped by the USWNT at age 17 or younger is a mixed bag of failures and successes. It's shocking to look at the numbers and realize there is no middle ground in this. The split is almost even.

Let's take Mallory Pugh out of the equation for a moment. Out of the other 18 players capped before their 18th birthday by the USWNT, 8 went on to earn over 100 caps for the United States while 10 earned fewer than 20 caps. It seems as though 20 caps is the magic number for these young players. 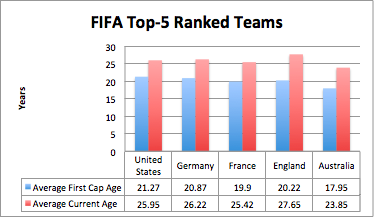 The United States has the highest average first cap age out of the top 5 women's teams in the world. So there's a great deal of pomp and circumstance involved when a player so young gets thrust onto the international scene. That's certainly no different with Mallory Pugh. When players like Mia Hamm, Kristine Lilly, and Julie Foudy - 15, 16 and 17 respectively - earned their first caps it was under a completely different landscape for women's soccer. There wasn't nearly the media coverage involved or the type of pressure to succeed under a microscope. That level of pressure didn't come until the 1999 World Cup when those three players were veterans with over 10 years of senior team experience.

US Soccer women's technical director April Heinrichs has stated in past interviews that playing up in age is crucial for the development of the mental aspects of the game. Looking at her first few games, it's hard to say that Pugh doesn't look mentally prepared to handle the rigors of international play. But living up to the grand expectations of being a wunderkind can often be overshadowed by the physical and emotional expectations that wear on a still-developing body and mind. Especially when that player is suiting up for a national team that played 20 matches in 2015 and is on track for more than that in 2016.

Is playing up in age benefiting Mallory Pugh and are there lessons to be learned from the young players who've come before her? Players have risen to the occasion and transitioned from wunderkind to bona fide international star. But for every Mia Hamm, Julie Foudy, Kristine Lilly, or Heather O'Reilly there's a Casey Nogueira or Justi Baumgardt - neither of whom had unspectacular careers, but certainly not the international careers projected at the time of their first cap.

The Youth Movement (sorted by caps)

Heather O'Reilly is the last player capped before 18 able to break the 20 cap mark. Casey Nogueira is the only other player to be capped young in the time between O'Reilly and Pugh. She earned 5 caps for the United States and scored no goals.

Contrast that with players like Amy Steadman, Kristen Weiss, or Alyssa Ramsey with a combined 16 caps between the three of them. All three players earned their first cap in the 2000/2001 season that is largely viewed as the beginning of a transitional period for the USWNT. So perhaps it is not just the age of the first cap that matters but also the timing of the cap. Milk cannot be unspilled. It's difficult to extrapolate out and say that waiting on capping these players would have significantly altered international career longevity. But it's hard to not think that waiting would have helped.

Ultimately the book is already open on Mallory Pugh. With 2 goals in her first 11 caps she's producing in ways that can be tracked on the stat sheet. Further, she's more than passed the eye test against opponents up and down the FIFA rankings. She's already halfway to that 20 cap mark and history shows that passing that is the pathway to significant national team success.

Making the roster for the Rio Olympics would be a huge step forward towards Pugh's chances of ending up in the upper echelon of American youth phenoms who carved out successful national team careers. Pugh looks like she's making a strong case to be a part of that final 18-woman roster. The absence of forwards Sydney Leroux and Amy Rodriguez - as well as the retirement of Abby Wambach - leaves multiple roster spots up for grabs. The timing is perfect for Mallory Pugh and if history has anything to say about it this could be the start of something special.