Scouting Antigua and Barbuda: How can the USA break down the Benna Boys

Antigua and Barbuda have defended well in World Cup qualifying, but they have several holes that the United States can exploit on Friday.

Share All sharing options for: Scouting Antigua and Barbuda: How can the USA break down the Benna Boys

The United States heads to Antigua and Barbuda on Friday with one goal -- get all three points. A draw, or maybe even a loss, would not be crippling and still give them a way through to the hexagonal round of World Cup qualifying if they follow it up with a win over Guatemala on Tuesday, but if the U.S. cannot get a win over the 106th ranked team in the world then there are some real problems.

Antigua and Barbuda have put in a good showing thus far in World Cup qualifying. They have just one point, but have not lost by more than two goals in any match, falling to the U.S. and Guatemala by 3-1 score lines. Nobody will accuse them of being overly ambitious, or even pretty, but they have done well to keep teams' attacks at bay, especially at home.

The Benna Boys have conceded just once in their two semifinal contests at home, and it took a stroke of genius by Carlos Ruiz to get that one goal. Admittedly, neither Jamaica nor Guatemala are particularly good going forward, but the Antigua and Barbuda defense has done its job.

That the entire Antigua and Barbuda team is committed to defending above all else does help. They regularly have nine behind the ball, with sometimes as many as five men along the back line and four in front. 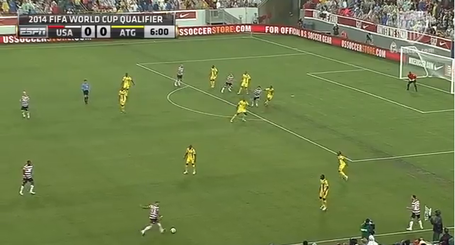 In their first meeting, the space that the Benna Boys conceded to the U.S. in the midfield and numbers they put behind the ball invited the Americans to lump balls into the box. That the field at Raymond James Stadium was soaking wet and tough to play through only more encouraged the U.S. to plays crosses in.

The U.S. will find themselves in a similar situation on Friday. Antigua and Barbuda will put men behind the ball again, as they have for every match in this round of qualifying, and the field will be a mess.

Being a cricket stadium, Sir Vivian Richard Stadium is usually hard and bumpy and then the Caribbean thunder storms come in and make it slick on top. Thunder storms are in the forecast for every day of the week so, along with the Benna Boys dropping men behind the ball, the U.S. will find it as welcoming to lump balls into the box as they were back in June.

Jurgen Klinsmann is clearly planning on an aerial battle. He called in Eddie Johnson and Alan Gordon just for that and both have been excellent in the air this season, but the U.S. would be wise to keep from falling into the trap of ignoring other ways to play just because the Benna Boys and pitch tempt them into doing so.

Antigua and Barbuda give off the impression of being very disciplined and organized, and to a degree they are, but do not confuse them with Germany. Sometimes, they can be downright baffling.

Their most common mistake in this round of qualifying has been deciding to push their back line higher, except doing so while their midfield gives their opponents the same space and time that they usually do. It happened against the U.S. on a couple occasions and also happened against Guatemala semi-regularly. 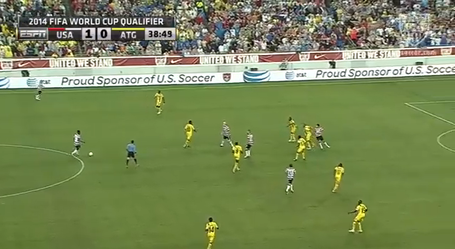 This defending is just asking to be beat over the top. Antigua and Barbuda still have their nine men behind the ball, but with a line this high and room to chip the ball in, they cannot concede the man on the balls (in this case Maurice Edu), that much time to pick out his pass.

On this occasion, Edu's chip over the top found Landon Donovan making a run over the top and he would have scored if not for a nice save. But even though Edu connected on this one, this wasn't a matter of the Benna Boys giving this away because they doubted Edu's ability to play that pass in. This has been a common mistake for them. Guatemala twice got golden opportunities when their back line pushed up and their midfield conceded space.

The U.S. can also beat Antigua and Barbuda if they can quickly switch the field. The Benna Boys almost invite opponents to switch the field on them, as if to say "if you can do it and beat us, go ahead, but we don't think you can."

When the ball is on one side of the field in the Antigua and Barbuda half, the Benna Boys will pull the entire back side of their defense to the middle. They don't even need the ball to be near the sideline to do it. if the ball is pretty central, but a bit to one side they will do this and players on the far side of the play are completely unmarked. 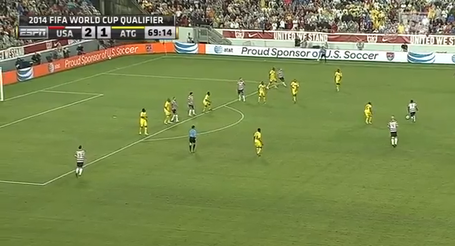 Again, Edu is on the ball and the argument could be made that Antigua and Barbuda did this because they did not think Edu could play the ball necessary to expose them, but that isn't true. The Benna Boys did this several times against the U.S. and away to Guatemala, where the Chapines turned it into a goal when they were able to pick out the man on the far side completely unmarked for a simple finish.

Guatemala also used Antigua and Barbuda's ignorance off the far side to create chances through the middle and it didn't take the one long ball across the field to do it. They played two quick passes to find the far side and with the Antigua and Barbuda scrambling to get across and support, Guatemala was able to find space in the middle. A ball back to the center got them on the ball 20 yards from goal with nobody around them.

Antigua and Barbuda have clear holes in their defense. That is doubly true when you add their set piece defending to what they do in the run of play.

The Benna Boys are a disaster on set pieces, as the U.S. learned when they got their first goal in June on a corner kick. They also got a free header for Clarence Goodson on a free kick and Guatemala routinely threatened on set pieces.

It isn't just the initial ball that hurts the Benna Boys either. They struggle to clear the ball away, giving away second and third opportunities on set pieces.

Finally, there is the quick counter attack. It is an obvious way to beat any team and the U.S. won't have too many of these opportunities because they will spend so much time on the ball, but the chances will be there. Antigua and Barbuda gave the ball away carelessly in Tampa, FL and against Guatemala, offering chances to counter. The U.S. did it well, getting several chances off of it and they will have to look for it again. Do so and do so quickly, and the Americans' athleticism will win out.

Antigua and Barbuda deserve credit for putting in a good showing in their four semifinal round qualifiers thus far. Like most overmatched teams that keep things competitive, they have done so by defending at all costs and it has been effective, especially at home. Just one goal conceded in two home matches proves that, but they have their holes.

The easy plan of attack for the U.S. will be to put balls into the box and it is one way through against the Benna Boys, but it is not the only way through. Antigua and Barbuda offer other ways to be beat and the Americans would be wise to use them.