Gooch is back in England, but this time in the Championship.

Oguchi Onyequ's quest to revive his career will continue at Queens Park Rangers. The American centerback has signed with the Super Hoops on a free transfer and now the 31-year-old will hope that Loftus Road and the Championship can be the setting for his return to relevancy.

Once the United States' best central defender -- so good that he drew interest from around Europe and spurned a handful of outstanding clubs to sign with AC Milan -- Onyewu hasn't been the same since tearing his patellar tendon in October 2009 against Costa Rica in a World Cup qualifier. While still has big and physical as he has always been, his speed and quickness, which were marginal to begin with, have never returned to make him an international quality defender again.

Bob Bradley and Jurgen Klinsmann have both willed Onyewu back to full strength, giving him call-ups to the national team when he probably didn't deserve them, but it hasn't come. He has played four four clubs since 2011 and none have fought to keep him.

It's tough to imagine QPR, his fifth team in the last two years, getting invested in him either. Not with Richard Dunne, Armand Traore and Nedum Onuoha all in the team and helping them to the Championship's best defensive record.

With the emergence of Omar Gonzalez, Matt Besler and Geoff Cameron, it's tough to imagine Onyewu finding his way back into the U.S. team. That's especially true with the apparent comfort Klinsmann has with Clarence Goodson and Michael Orozco. Even with a new club in a new league, Onyewu's time has passed. 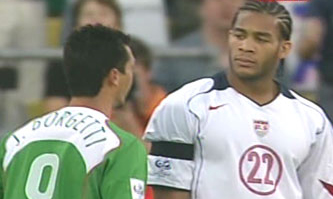