Has Julian Green committed to play for the U.S.? That's unclear, but he will train with them before they play Ukraine.

Julian Green has decided to play for the United States. At least that is what Bild is reporting.

Green, an 18-year-old Bayern Munich forward, has been the subject of international speculation because of his fast rise at the world's best club and his ability to play for either the U.S. and Germany. Born in Tampa, Florida to an American father and German mother, but raised in Germany, Green has the choice of which country to play for. As recently as November, Green said he wasn't ready to made his decision, but Bild claim he's now picked the U.S.

U.S. to play Mexico on April 2 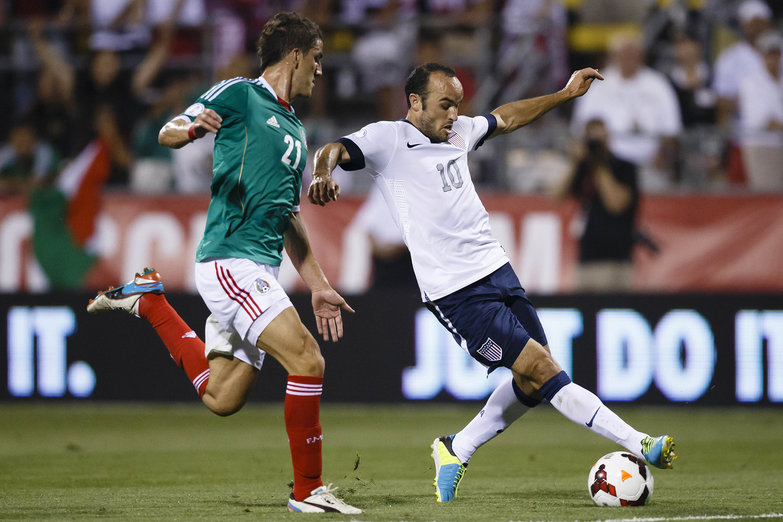 The U.S. and Mexico will renew their rivalry in the final match before World Cup training camp.

U.S. Soccer confirmed that Green will train with the Americans ahead of their March 5 friendly against Ukraine, but he will not play in the match. Green would have to file a one-time switch with FIFA to take part in the match because he has played for Germany youth teams, but filing the switch would tie him to the U.S. To this point, he has not filed for a switch, so playing for Germany is still on the table for the Bayern Munich starlet, but if Bild is correct, it won't be long before he does tie himself to the Stars and Stripes.

U.S. assistant Andreas Herzog was recently in Munich to watch Green and spoke with the youngster, but there was no word of a commitment from Green until the Bild report.

The report claims that Jurgen Klinsmann talked to Green about a spot on the World Cup team, which would obviously be a huge deal to an 18-year-old. It would also be quite a leap by Klinsmann to hand one of his 23 places to a player who just made his senior team debut in November, a two-minute cameo that remains his lone appearance for Bayern.

Green told Bild "great chance and a real honor" to play for the U.S. and that "it doesn’t get any better" than to play for the country of his birth, possibly lending credence to their report, but whether those quotes were related to his committing to the U.S. long-term or just to train with them remain unclear. Bild has a mixed reputation, sometimes breaking stories in Germany long before anyone else, and sometimes being caught with stories that aren't true in the least.

For now, the U.S. can take comfort in the fact that they are going to get Green into camp, not just to evaluate how far along he really is, but to expose him to the senior team. Maybe that, from the coaching to the quality of play to the culture, convinces Green to choose the U.S., but it at least keeps them in the discussion, especially with Green having played for the Germany U-19's just three months ago.

Has Green committed to the U.S.? Maybe. Has Klinsmann promised him a World Cup spot? Unlikely. But Green will put on a shirt bearing the U.S. crest, even if it is just a training shirt, and that is progress.