Are you really going to tread?

Share All sharing options for: If celebrities like the USA World Cup kit it must be good

The definitive list of the most American things, as declared by George Washington:

Americans love celebrities. It doesn't matter why someone is famous; it just matters that they are famous.

The fan reaction to the new World Cup away kits has been mostly negative. Fans have lambasted the shade of blue, how similar it looks to other countries' kits and who knows what else, but that was before Andrew Luck wore the jersey. It was before Spike Lee and Diplo wore it. It was definitely before Alyson Felix, who has won gold medals for America, wore it.

Now, if you still don't like the new kits, you are flying directly in the face of the No. 5 most American thing.

Plus, look at Haim. Those are faces that do not tread. 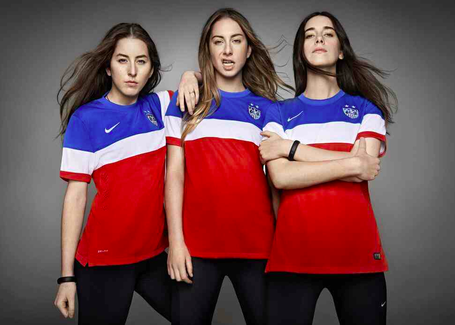 So keep disliking the kit, just know that you are treading in doing so.