How the United States survived the Group of Death

Germany’s rout of Portugal and goal differential aside, here’s a look at what the United States did well to earn a spot in the knockout stage.

Share All sharing options for: How the United States survived the Group of Death

We saw glimpses in the Send-Off series that Jurgen Klinsmann was going to play soccer counterattack style. But for the last three years he had been preparing the team to come out of its shell and attack against the biggest teams when necessary. The United States had just enough success attacking to march on, and it appears as though that focus did help.

One look at the possession statistics and it's easy to see that the United States relinquished possession in an effort to keep numbers back defensively. They possessed the ball just 40 percent of the time in group play, but they showed the ability to possess more when necessary. Take a look at their possession by game situation. They increased their possession when the game required.

Prior to the Germany match this difference was even more pronounced. The United States possessed the ball 50 percent of the time when down 1 or tied against Ghana and Portugal. The United States showed some ability to impose their will on top competition. Against Germany there was less incentive to possess the ball as the goal was to win (not really), tie or lose a close game, so their possession numbers suffered and was probably not indicative of their capability.

The lack of possession did result in a pretty massive difference in shots on goal. Their opponents took 55 shots to the United States' 27. When looking at the location of the opponents' shots in the Send-Off Series we saw that the United States held a distinct advantage in that area, shooting much closer to the target than their competition. But that advantage disappeared in group play. The United States took 48 percent of their shots inside the 18-yard box and 52 percent outside. Their opponents were split 50/50. The opponents had a very small advantage in this case.

Given the great disparity in shots it would seem the United States got lucky to have a break-even goal difference. But keeping defenders back has its benefits of course. Take a look at this chart. The dotted line represents finishing rates (goals scored divided by shots taken) by number of shots taken in a match. 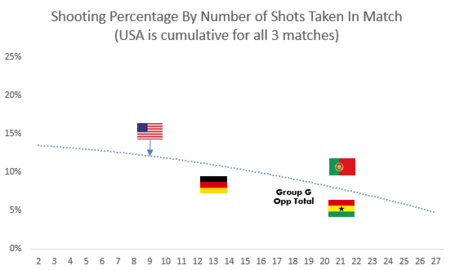 The chart highlights the very real benefit of sitting back defensively. The opponent will take more shots, but the more they take the less productive they are.

You can see that most of the difference in finishing rates was "predetermined" by the strategy that Klinsmann employed and the terrific execution by the team. But what about the fact that the United States shot a little better than expected? And why did their opponents shoot a little worse than expected? Was it good fortune or something else?

Think back to those four goals; Clint Dempsey's left footer, John Brooks' corner header, Jermaine Jones' exquisite blast from deep, and the Dempsey belly goal. One of those was the difference between surviving and going home. I'm just happy they all happened.

Special thanks to the guys at American Soccer Analysis for their help in generating the chart.